Transformation of the finance organization

Move away from inefficient organizational structures to a sustainable finance department – Transform your finance organization with Draxinger & Lentz.​

Transformation of the finance organization

Move away from inefficient organizational structures to a sustainable finance department – Transform your finance organization with Draxinger & Lentz.​

Realignment of the finance organization

The finance organizations of many companies are still traditionally divided into internal and external accounting. However, this split between controlling and finance results in increasingly redundant activities and inconsistent data. This is driven by the management need for a clear set of figures and supported by the technical harmonization in modern ERP systems. In addition, there is an increasing need for personnel with better technological understanding and IT skills. ​

Draxinger & Lentz offers you a structured approach to a very complex topic and works with you to develop an individual solution for an efficient finance organization. The goal is an optimal interaction of corporate management, structural and process organization as well as the technical infrastructure.

Our approach for your successful finance transformation​

Our approach is divided into the following five phases:​

Stocktaking
In a finance transformation, the organization, processes and IT systems play a central role. A reorganization of finance departments changes the range of tasks and the variety of tasks of many positions. Due to increasing reporting requirements, an optimal interaction of accounting and controlling is indispensable and can secure efficiency potentials. To harmonize the content of internal and external accounting, the current organization must first be recorded and analyzed with a view to job profiles and cooperation. To increase process efficiency, the processes must first be recorded and documented. The system architecture also has an influence on the organization of the finance functions. Therefore, the first step is to analyze the IT strategy, the IT architecture and the current system requirements. The findings are evaluated, any need for action is derived and summarized in an operating model.

Transition phase
During the transition phase, the new organizational structure must first be communicated to employees and a decision made on how to fill positions. Employees are briefed on their new area of responsibility and a redistribution of capacities and activities is carried out. The type and implementation of the transfer of tasks is particularly important here. Furthermore, the employees must be prepared for their new activities.

Go-live
Together with you, we plan the optimal go-live path and support you in all phases, from preparation through the transformation phase to the final launch of the new organizational, process and system structure. The go-live can take place as a “big bang” or step-by-step, for example. Above all, it is crucial to adhere to the defined schedule.

Optimization phase
Particularly after go-live, the transformed finance organization must be supported in order to realize the optimization potential that has been identified. The results and feedback from employees should be recorded and actively processed. In this way, any necessary adjustments to the financial organization can be made in timely fashion. In addition, continuous process analysis along the end-to-end processes can reveal further optimization potential.​

An example of our work for clients 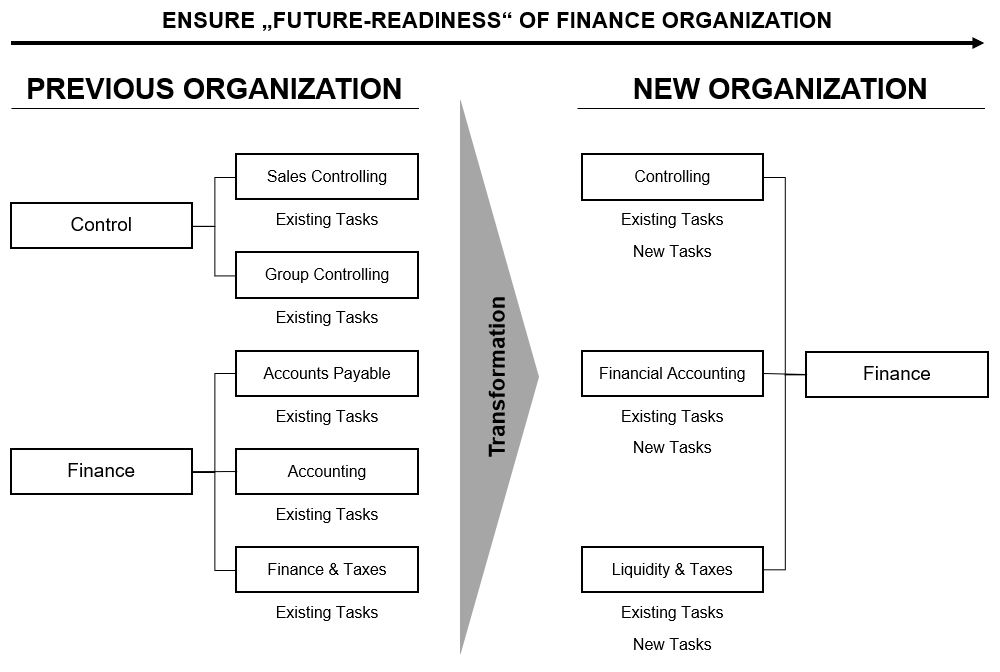 We assisted a medium-sized company in realigning its commercial organization to make it more fit for the future. Specifically, the organizational structure was to be optimized to ensure more effective commercial management and more efficient processes. Furthermore, the company wanted to prepare for digitalization and SAP S/4HANA.

To this end, the central results and guard rails for the further course of the project were first defined in workshops together with the customer. It was important that a new organizational structure was in place at the beginning of the year, that it was staffed, that its positions were described, and that training requirements and knowledge transfer were regulated. In addition, the new structure also had to be compatible with SAP S/4 HANA. The further course of the project was defined with the following guiding principles: similar tasks were to be bundled into transactional and controlling activities, an integrated view of internal and external accounting was to be created, a strengthening of number analysis and interpretation was to be achieved through more efficient data creation, a process orientation of the organization was to be achieved, technology and automation potential was to be exploited, and a mindset for improvement and responsibility was to be created.

In the end, this resulted in an organizational structure that was consolidated from five departments to three. Within Finance, the Steering, Financial Accounting, and Liquidity and Taxes departments were created. The previous tasks were then distributed among these three departments, redundant tasks were deleted, and some new tasks were added.

Get in touch for more information

We would be happy to discuss a finance transformation initiative with you on a non-binding basis.​

Draxinger & Lentz accompanies you throughout the complete transformation of your finance organization, from the stocktaking to the target definition to the go-live with a subsequent optimization phase.​

Read further insights on this topic from our Blog