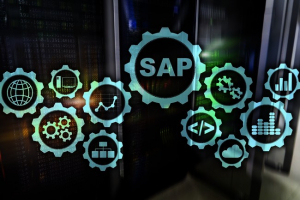 In 2015, SAP launched S/4HANA, a completely new business suite to replace the widely used SAP ECC (ERP Central Component), the market for enterprise resource planning (ERP) system applications. S/4HANA is the fifth standard software generation of SAP AG. SAP started with R/1 in the seventies, followed shortly after by the mainframe-based system R/2, which established the first major era in the eighties. In the nineties SAP R/3 followed, which was based on the client-server principle. SAP R/3 convinced the customers relatively quickly and replaced the standard software package R/2. SAP R/3 has a modular structure (purchasing, production, sales, finance, controlling, human resources) and is known for its integrative processes (quantity and value flows). In the early 2000s, SAP switched from R/3 to SAP ECC (ERP Central Component), often also called SAP ERP, which runs on a web-based application server. SAP ECC, with the modules that are still available, is the core product of SAP Business Suite. However, it goes beyond these basic components and supports specialized functions such as supply chain management (SCM) and customer relationship management (CRM). SAP ECC runs on different databases, such as Oracle, IBM, or Microsoft. SAP will provide mainstream maintenance for core applications of SAP Business Suite 7 ECC until the end of 2027 and offer optional extended maintenance until the end of 2030.

2010 was the release year of SAP HANA (High Performance Analytic Appliance). SAP HANA is not a new ERP system and is not to be confused with S/4HANA (more on this later), but rather a development and integration platform for software applications, which essentially consists of a relational database management system and combines OLAP and OLTP landscapes in a common in-memory database. With in-memory technology, the data is stored in the main memory of a system. Compared to the previous databases, which stored their data on hard disks, data accesses based on SAP HANA are significantly faster. Furthermore, the data is stored in a column-oriented manner, which leads to performance improvements, especially when performing analyses and forming aggregates in real time. The HANA database is also a solution for processing both structured and unstructured data. The HANA application, developed for business intelligence and business analytics applications, was first used in SAP Business Warehouse and SAP Business Objects. In 2011, a first scenario for using SAP HANA in connection with SAP ECC financial data was launched. This data was replicated in HANA (as a secondary database) and made available via so-called accelerators for performance-critical processes or reports. In 2012, SAP released SAP ERP completely for HANA as the primary database (SAP Business Suite powered by HANA).

In 2014, SAP took the next step and released the first software version, the non-disruptive SAP Simple Finance Add-on, to optimize table structures. By dividing software components within the program, it was possible to remove index tables and table structures in Financial Accounting and Controlling and replace them with views. In this version, Financial Accounting, Controlling and the characteristics of Profitability Analysis (CO-PA) were also linked together. This development ran under the name logical document. With Simple Finance, it was possible for the first time to use a profit and loss statement which, in addition to the company code and business area, allowed a drill-down to cost centers, orders and all account assignments in Controlling, as well as to the market segments of Profitability Analysis.

SAP S4/HANA Finance thus goes one step further. Certain key components of the former FI/CO suite have been completely reprogrammed to fully exploit the potential of SAP HANA. S/4HANA Finance thus uses a new version of the SAP financial software with the Universal Journal as a union of several transactional tables and thus has a so-called „single source of truth“ for the data of external and internal accounting. However, the classic logistics system is still used. The modules MM (Materials Management), PP (Production Planning), PS (Project System), PM (Plant Maintenance) and the industry solutions therefore run as before (but on the SAP-HANA database).

With S/4HANA Finance, SAP Fiori is also used as a new UI technology. Fioris are apps that are used for both transactional applications and reporting.

In November 2015, SAP S/4HANA was launched with an on-premise version and a cloud version. Both versions inherited the software changes of previous releases such as the elimination of the summary and index tables, Universal Journal, new asset accounting, new cash management, etc. However, SAP S/4HANA now also includes changes in logistics, such as the use of the business partner instead of separate master data for customers and vendors, long material number, new data model for inventory valuation or material ledger as a subledger with transaction-based price determination.

SAP S/4HANA is the SAP offering for the digital age. The underlying HANA in-memory technology can be used to cover essential requirements of modern IT systems. Due to the considerably improved access times, it is possible to apply flexible evaluations in real time to large amounts of data. SAP S/4HANA is also characterized by good user-friendliness via the Fiori apps for analytics and transactions. The apps in the SAP system can be used on all devices such as laptops, tablets or smartphones.

The above-mentioned Universal Journal provides a „single source of truth“. It breaks down the traditional two-circle system of German accounting between controlling and finance and ensures significantly improved reconcilability of values.

S/4HANA also increases the sharpness of control by expanding permanent and financial statement independent reporting capability through, among other things, margin analysis. It increases the reporting capability through more flexible business reporting, big data in real time, predictive reporting and analytical simulations. SAC (SAP Analytics Cloud) has also been developed for the analytical applications. Successive planning and analysis applications will be developed in SAC.

With the new software generation, SAP also aims to abolish the module-oriented (MM, PP, SD, PS, PM, FI, CO). Increasingly, there is a transition to integrative working and thinking in end-to-end processes, which should increase process efficiency (e.g. reduction of silos and integration deficits).While S/4HANA is the Digital Core, the system is also characterized by its openness compared to its early predecessors. Examples of this include a significantly easier connection of entities from other systems via Central Finance or from upstream systems with calculation algorithms via SAP PaPM (Profitability and Performance Management Solution). In addition, innovations relating to IoT or machine learning can also be integrated.