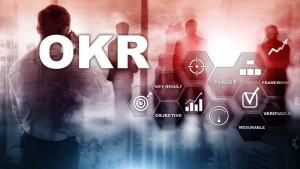 The US semiconductor manufacturer Intel had outstanding technical leaders at the top in its founders Gordon E. Moore (Moore’s Law) and Robert Noyce. However, the Hungarian immigrant Andy Grove, who joined the company shortly after its foundation, was largely responsible for Intel’s success. In 1997, Grove was named „Man of the Year“ by Time magazine and Intel was one of the most valuable companies in the world at the time. Before Grove took over as CEO of Intel, he was COO for a long time. It is said that even as COO, he was already in charge of Intel’s operations.

Grove designed the management and goal-setting system OKR at Intel. OKR stands for „Objectives and Key Results“. At first glance, the OKR methodology strongly resembles MBO (Management by Objectives) developed by management guru Peter Drucker. For Drucker, companies should not be profit machines exclusively following Taylorism. What was particularly important to him was the respect and trust that should be shown to employees. Through management by objectives, employees should be enabled to participate. Modern companies, such as Hewlett-Packard (“H-P Way”), for example, quickly adapted the methodology in the 1960s. Later, however, Drucker himself realised that MBO was not the big leap to cure management inefficiencies. Targets were set in the companies, but they were delegated from the top far too statically. The goals were then buried in departmental silos or were ultimately just contextless KPIs. Finally, the ambition of these targets was further reduced by linking them to incentives, which in turn encouraged risk-averse behaviour.

MBO is primarily a top-down approach that focuses on the „what“, i.e. the direction. This can tend to encourage risk aversion by integrating incentive mechanisms. OKR, on the other hand, focuses on both the „what“ (objectives) and the „how“ (key results) and thus also allows management to quickly adjust direction. Furthermore, OKR does not only work top-down, because in both setting objectives and determining the necessary results, the organisation must be involved in a cascading manner from the group via the division or business unit to the teams, i.e. OKR are also defined at level where operational actions are taken based on strategic objectives. By involving employees in OKR and thus in strategy implementation, the culture of responsibility in the organisation is enhanced and the strategy is no longer a matter for top management alone. Understandably, this also places demand on the change management process when establishing OKR. It should also be noted that there may be a conflict with the personal annual target agreements of the employees, which are oftentimes part of the compensation. This could be remedied by integrating these target agreements in the OKR. However, this could have a counterproductive effect on ambitious goals in the OKR. And it is precisely these ambitiously set goals that are an essential feature of OKR.

A focus on essential and concise goals is crucial. Steve Jobs already said that innovation also means saying „no“ to a thousand other things. That means ideally you have three to five OKRs each, because too many OKRs are more likely to distract from the process and direction. We also warn against excessive perfectionism in the description of objectives. One can discuss specific formulations for hours, without adding real value Especially with innovative strategies in new areas such as digital transformation, for example, speed and entrepreneurial thinking are called for and it often makes sense to uncouple from traditional mechanisms. In addition, the goals in OKR can be adapted again in short cycles.